Hill Myna (Gracula religiosa) – another LIFER at my backyard

What an exciting week – two LIFER in three day. Actually this “Tiung Emas” is not true lifer as I have seen it at cage somewhere – a popular cage bird for it nice song that can mimic human voice, like parrot. Anyway this is the first time I saw it in natural habitat.

I was waiting for Pond Heron (Ardeola sp) – another early migrant here, to perch at this dead teak tree, when suddenly a flock of five myna perched. I though all that Common Myna or Javan Myna that I see every day. Then I noted unusual yellow colour at the side of the head. I just fire a few shot in the thick morning fog and mist with the flash off. So here are a few poor shot for my record.

The different between the two species is in the head yellow patch of Hill Myna (left) and Common Myna (right).
The feather is also different with Jet Black for Hill Myna and dark grey for Common Myna. 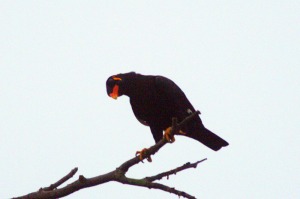 Thank you for Leave a Reply Cancel reply

This site uses Akismet to reduce spam. Learn how your comment data is processed.

Thanks for your comments

Copyright © 2019 Redzlan A. Rahman, and RaubNatureBird.Photography. All the photos by Dr. Redzlan A. Rahman, unless otherwise stated, all rights reserved. It is unlawful to copy, re-use or redistribute these photos in any way without my permission. Thanks for visiting!