When I was shooting the common myna nest (the hole facing south), a boy said “Pak Cik, sebelah sana pokok ada burung hujau” (Uncle, that side of tree got green birds).
So I graped my gear and rush to the group of boys who pointed to the holes at the northern side of that tree.
Oh boys!, there was six holes here!.
This pictures shows the upper most four holes. There was no active nesting at that holes.

Than one of the boy, took a stone and knocked it to the tree trunk, and this was what I saw – an adult Gold-whiskered Barbet looked out of the hole and flew away.

I did not believe my eye initially that the dead coconut tree in front of my mother-in-law neighbor’s house, has an active nest of three birds species.

A few minutes latter it flew in bringing food to the chick, I fumbled and unable to focus and failed to capture that precious moment -phew! 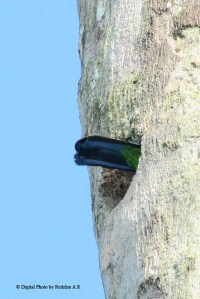 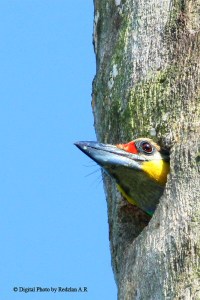 Only able to get the head and tail section of adult bird.

I have photograph this species a few time at my backyard, with food in it beak ‘here‘.

This photo was taken later at my backyard at Raub, (not at that nest above).
Just to show how the adult look like.

Thank you for Leave a Reply Cancel reply

This site uses Akismet to reduce spam. Learn how your comment data is processed.

Thanks for your comments

Copyright © 2019 Redzlan A. Rahman, and RaubNatureBird.Photography. All the photos by Dr. Redzlan A. Rahman, unless otherwise stated, all rights reserved. It is unlawful to copy, re-use or redistribute these photos in any way without my permission. Thanks for visiting!